Free Shipping Over C$50
DETAILS Due to current circumstances, some shipments may arrive later than expected. We apologize for any shipping delays and appreciate your patience at this time. Our carriers, such as Purolator and Canada Post, may have more specific updates.

Free Shipping on orders over C$50. Some exclusions apply. This offer goes into effect after all other discounts are taken and prior to taxes being applied.

Dickies Canada Volunteers To Help In The Building Of Habitat Homes

In August 2012, the staff in Canada put our work apparel to the test, helping out with a Habitat for Humanity build in Ontario.
The project is currently building homes for four families in 2012 and will be building another additional four homes in the same location next year. The WDC team was not sure what to expect heading in, but by the end of the day, everyone had nothing but great things to say about how they were able to contribute and the jobs they were able to perform that they never imagined they would do. Some of the jobs included installing siding and in-floor heating, roughing in a bathroom and building a front porch.
It was hot, but we made it through the day and as expected our apparel did too! 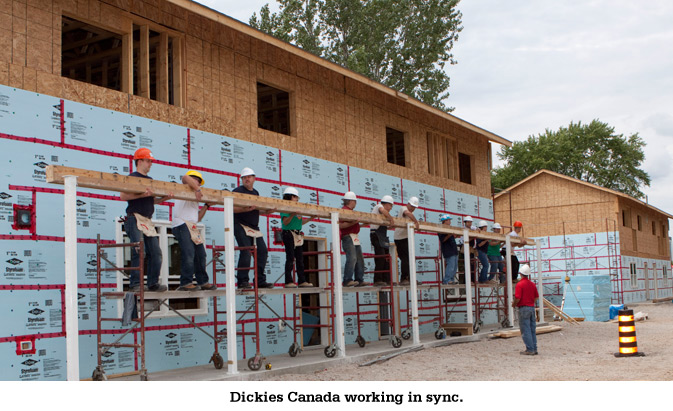 MISSISSAUGA, ON - Leading global work wear maker Williamson-Dickie Canada Co. is pleased to announce DIY Personality Bryan Baeumler as the company's brand ambassador for Canada. Baeumler is a Gemini award-winning host of the top rated HGTV series Disaster DIY and two new shows that will begin airing in 2012 (House of Bryan 2: On the Rocks and Leave it to Bryan).

September 2011 'As Seen in the Toronto Star'

Dickies and CHL Announce Activation with 24 Clubs in the WHL, OHL & QMJHL for the 2011/12 Season

Toronto, ON - The WHL, OHL & QMJHL Leagues in association with Williamson-Dickie Canada Co. makers of quality workwear, are proud to announce the launch of their second year in a 3-year partnership that includes grassroots programming across several Canadian Markets along with brand integration across various national broadcast and online properties.

Announcing the Dickies Hardest Working Players of the Year
in the WHL, OHL & QMJHL!

The Western Hockey League, The Ontario Hockey League and The Quebec Major Junior Hockey League in association with Williamson-Dickie Canada Co., makers of quality workwear, are pleased to congratulate the WHL, OHL & QMJHL Dickies Hardest Working Players of the Year. Their dependability, quality of play, and commitment during the regular season has earned them their top honours. Each player is a recipient of $1,000 scholarship, Dickies merchandise, and a custom Dickies Hardest Working Player of the Game jersey. Dickies encourages all you hard working QMJHL fans to visit www.dickies.ca for all your workwear needs and to keep a look out for Dickies activating in your local market during the 2011-12 season!

Toronto, ON - The Canadian Hockey League in association with Williamson-Dickie Canada Co. makers of quality workwear, are proud to announce the launch of a new strategic 3-year partnership that includes grassroots programming across several Canadian Markets along with brand integration across various national broadcast and online properties.

Dickies Canada is a proud supporter of the Hammer Heads program through the Central Ontario Building Trades. This innovative program provides hands-on training, in a variety of trades, to young men and women who come from priority neighbourhoods. This unique program is important because it exposes these young Canadians to valuable career skills. Like Hammer Heads, all of us at Dickies Canada believe in improving our communities, and working with groups like this, to instill the values of professionalism, commitment and determination in young people all across Canada.

Dickies was happy to supply a full complement of our guaranteed quality work wear to the hard working group in May 2010. And we were delighted to get first-hand feedback on the performance, style and durability of our apparel at an energetic follow-up session with the Hammer Heads on August 4, 2010. Dickies Canada is proud to be associated with this community-based program, and we look forward to a collaborative and productive relationship with the Hammer Heads. 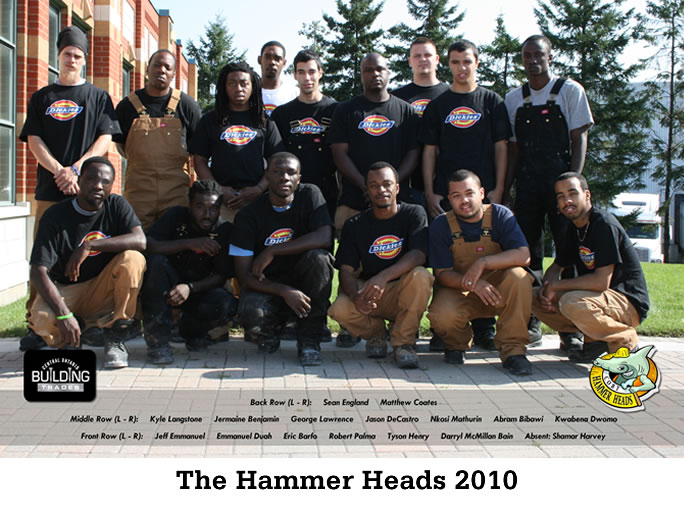 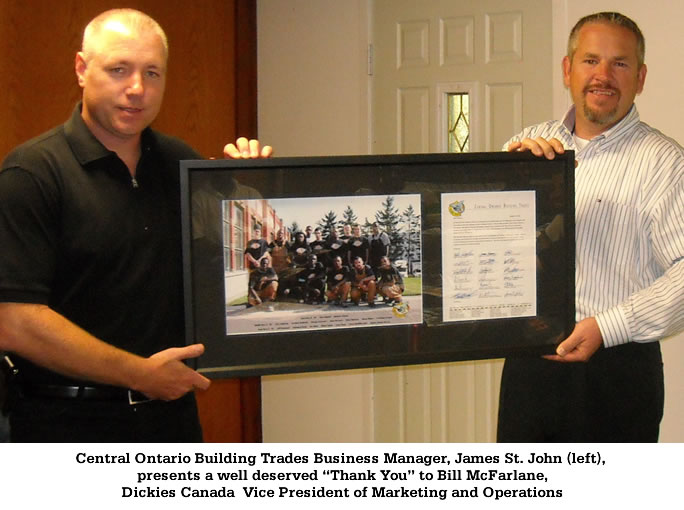